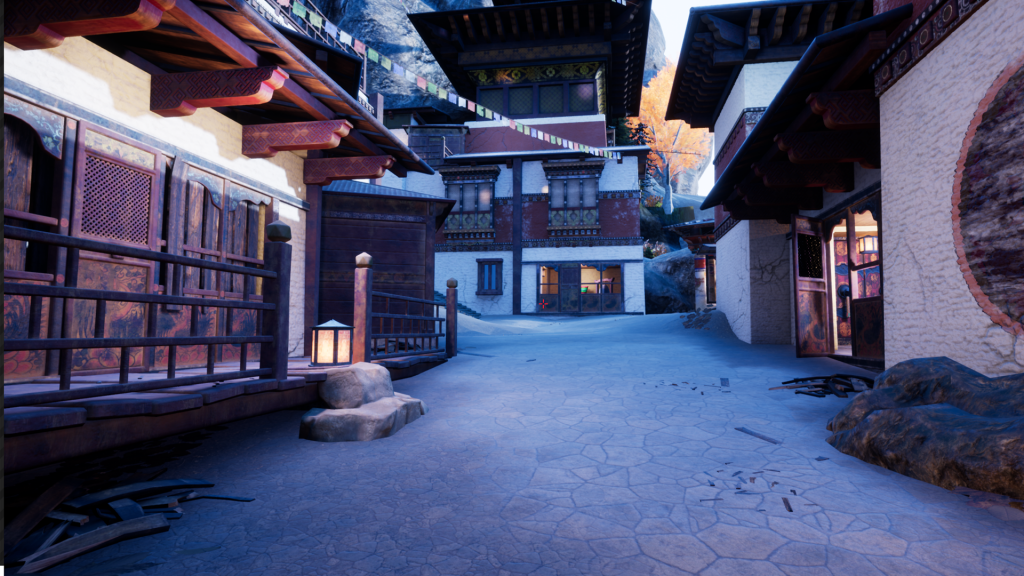 The production started with me finding an Asset pack in the Unreal Engine Assets store.
Unreal Asset Store Buddhist Monastery Environment
The models in the pack were beautiful and seemed easy to work with.
I found Tiger Temple in Bhutan and decided to base the palace on that building. There was a lot a imagery that I liked where the player would be able to look upon the Palace and walk along the mountain pass to reach it. I liked the shape of the Temple and that it looked like it was carved into the mountain I tried to recreate this in my own way.
Doing a realistic outdoor environment needed a lot of research and solid references, I gathered a lot of nature pictures from Buthan and based my outdoor environment on that.
I watched some Speed Level design videos on Youtube where people created large mountain landscapes and tried to apply the methods they used for sculpting and painting ground, foliage and placements of trees. This gave me some good tricks for creating a realistic nature environment effectively.

The nature in Bhutan is very lush so I wanted a lot of far distance tree foliage. So I made sure to use tree and foliage assets with LOD support and low triangle count when viewed from a distance. I used fog in the distances to hide the fact that the trees had a low poly count.

When I did the block out and started to walk in the environment the palace seemed too large and I wanted it to feel smaller and more carved into nature. To fix this I added a high mountain behind the palace that would make the palace seemed smaller. The mountain I wanted was so high that it extended over the playable terrain hight limit. I had to create a second landscape, that was positioned above the playable landscape. 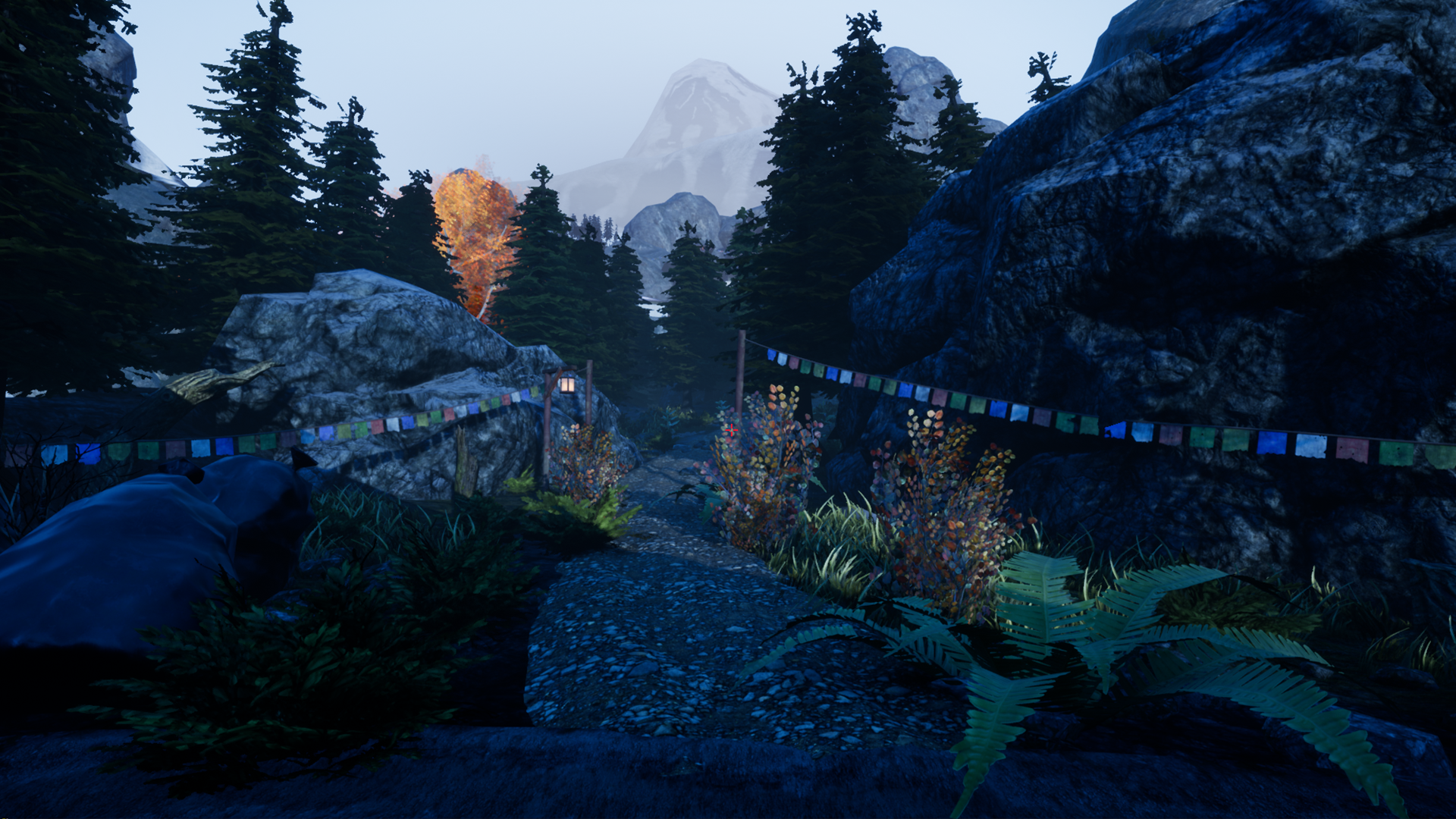 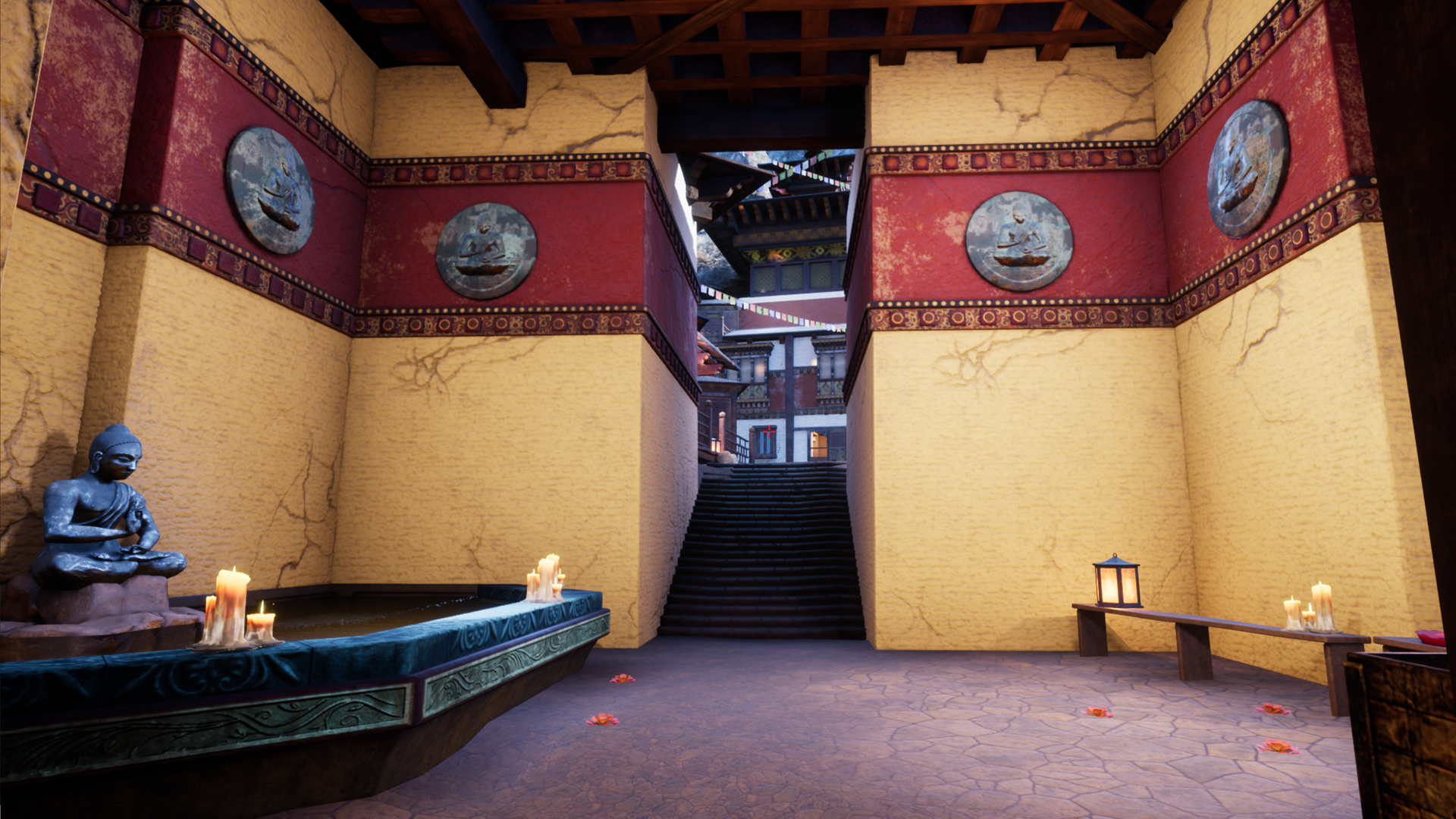 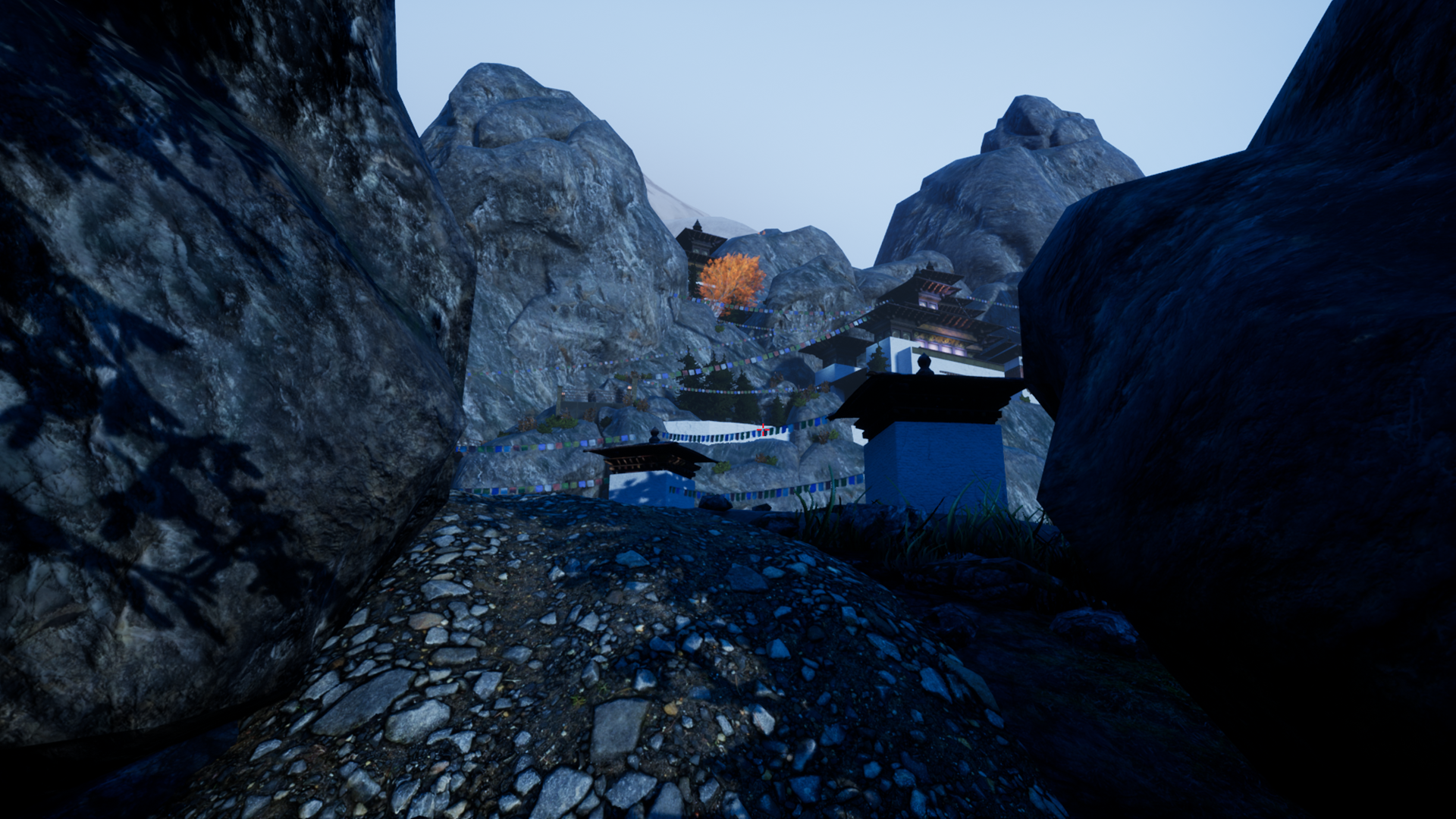 The beginning of a story

The level starts with a black screen and with the sound of a bus driving away. When I fade in the game the player will see a forest.  I added some flags and a small footpath through the trees to guide the player forward. The path leads to a lookout spot where the player can look up on the Palace as a clear goal. I added some light to one of the towers indicating the tower was inhabited.  At the lookout spot, the player the player jumps down from a large rock intended as a “Point of no return”. I used different assets to guide the player forward like prayer flags, lanterns, orange trees and the footpath.

When the player reaches the palace I wanted it to feel like it was closed down, with boarded up windows, stashed away pillows and tools. Indicating that something has changed and there is only one person left to maintain the palace. Inside the main room of the palace, the player can walk up on a little staircase to a door that leads to the tower with lights in it. The small stairs would indicate that the player was special and the reason for the walk was not the get to the main room. It was to meet the mentor.

I wanted the level to take place in the morning. I liked the clear cold blue morning in contrast with the warm orange colors from the indoor environments. I used Post Processing to enhance the warm and cold colors.
I focused my efforts on two outdoor views, one from below where the player would look up upon the palace, creating a nice depth of field and framing the palace in an inviting way. The other view the player should look down from where he/she came from. Showing of the landmarks the player have past bye previously.

A wanted to learn more about Unreal Blueprints, so I did a small puzzle where the player would turn on a prayer wheel to open a locked door. I also added doors to the Palace entrance and main room that opens by pressing E.

Setting the location Bhutan as a frame of reference was super useful and the images helped me. I learned so much about sculpting, painting terrain and foliage placement. To make nature feel realistic was hard and I sometimes I started in the wrong order, for example adding the foliage before I was done with terrain painting and tree placement was ineffective. I now feel more comfortable working in Unreal Engine 4 and with Blueprint scripting. I have enhanced my skill in guiding the player forward and doing an outdoor environments. 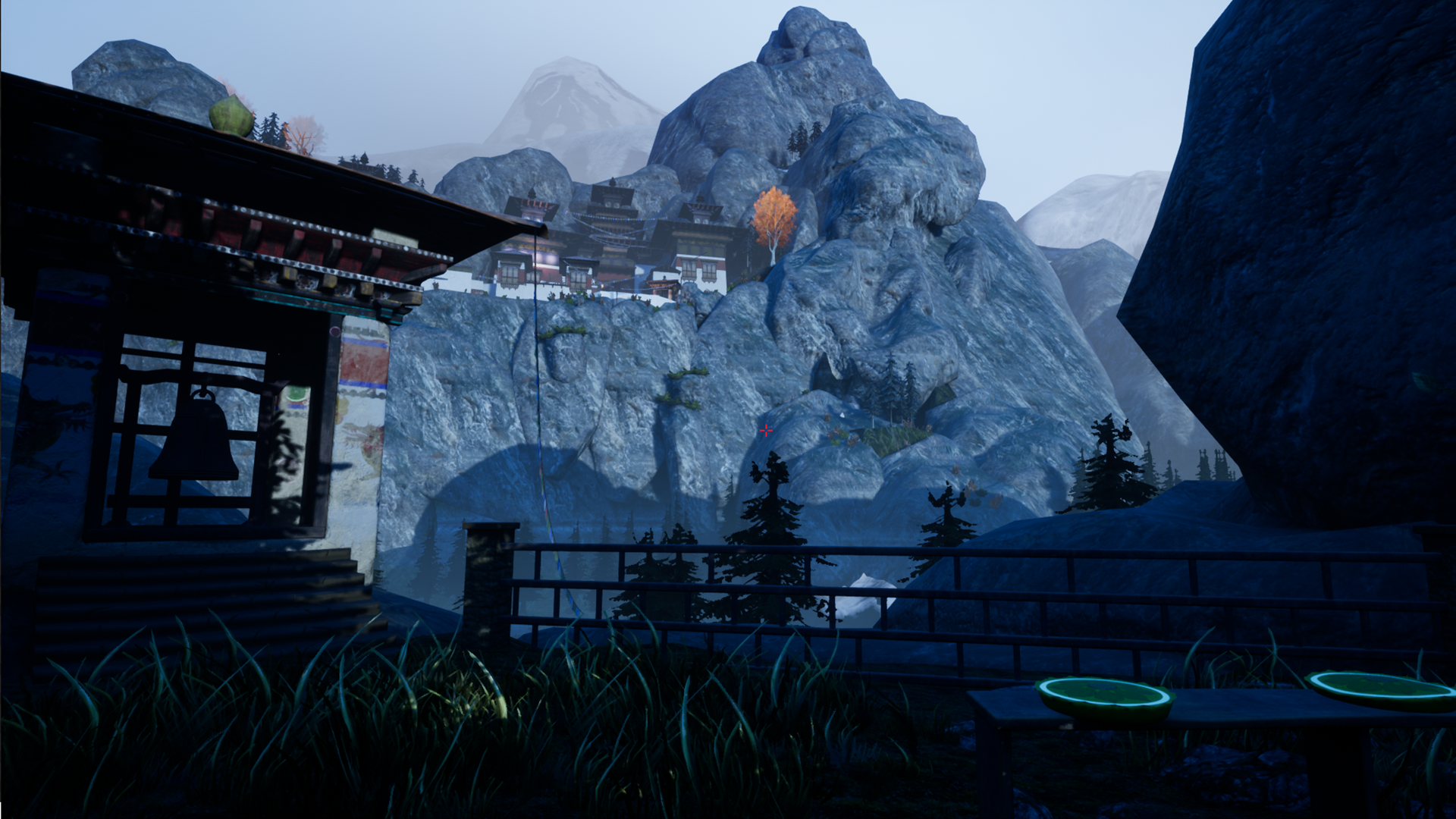