Rocinha Favela is a map for the survival mode in Left 4 Dead 2. The map takes inspiration from the favela Rocinha in Rio de Janeiro.

Up to four players must fight the hordes of zombies and survive for as long as possible. I wanted to make a map where players could be agile and jump between roofs. The rooftops would be where the players can make their stand.  When the ammo and medical supplies run out players have to go down to the street level, where there is a high chance of getting separated from the group and pushed into a corner by the swarms of zombies. 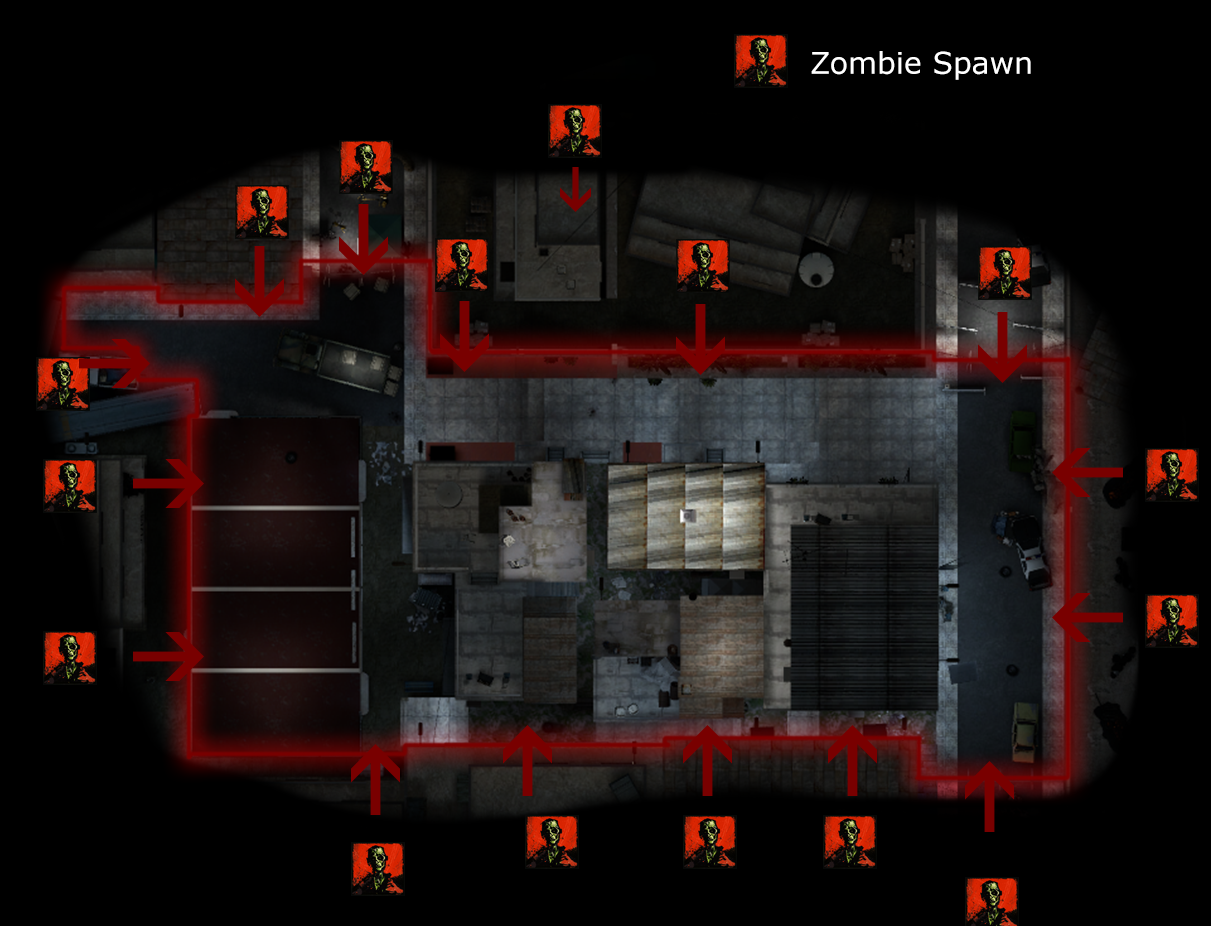 The favela felt like a setting defined on the structure of the rooftops. I felt this was the perfect setting for agile movement and elevated defense points. I did an overview to get a sense of the flow and how I would create interesting defense points in the level and where the zombies would come from. The narrow footpaths and streets would create an intense and challenging level.
I watched a lot of documentaries and talked to people who lived or visited Rio de Janeiro. The thing that struck me was the cultural phenomenal coming from the different favelas in Rio.  Through environmental ar,t I wanted to convey this side of the favela with graffiti, colorful buildings and of course a football field. Usually, when I see the favela in a game or movie it is just portrayed as a poor slum with criminality and problems. I wanted to convey a more vibrant environment where people lived. 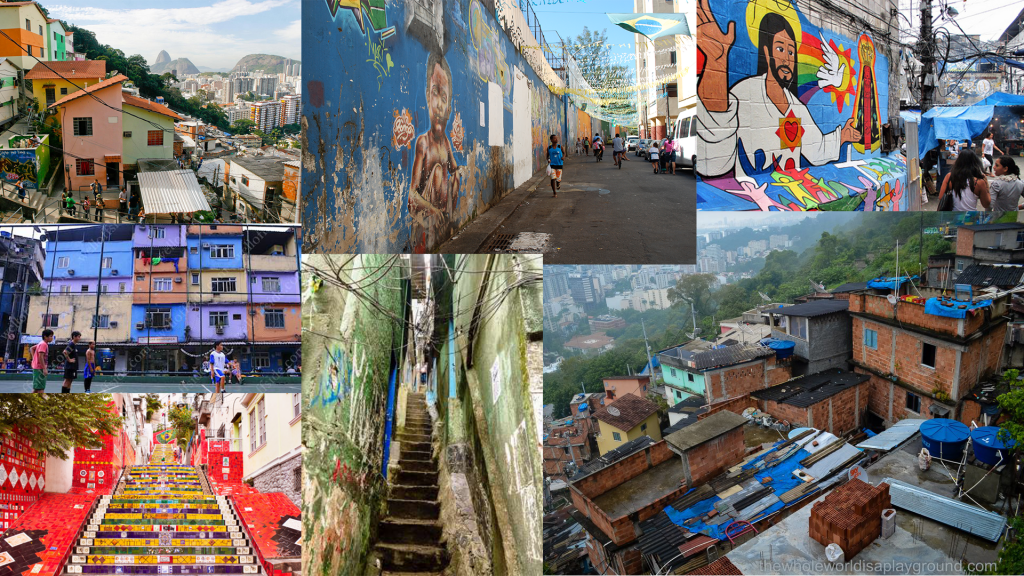 Make the player maneuver around.

The high ground gives the player an advantage over the zombies. It is also designed with some bottlenecks where the players can hold of the zombies. Creating a nice defense point was important but having the player camping on the same location the whole match would not be fun so I wanted to mix up the gameplay and make the players explore the lower levels of the map.
I placed all the resources across the map except on the roofs, forcing the player when in need of ammo or medical supplies to go down to the crammed street level.
I have three locations with different types of resources around the rooftops.
A pharmacy with all medical supplies. A police car with small caliber weapons. For the bigger guns, I placed them by a military truck. All the melee weapons were spread across the map. Having weapons and medical supplies in locations that explains why they are there is important to me when I create levels. I think it is a great tool for telling stories and not breaking the immersion.
To make the lower levels of the map more accessible I created some intersecting paths so players would not get cornered by zombies to easily. I always wanted at least one escape route. Adding intersecting paths would also raise the risk of the team getting separated. 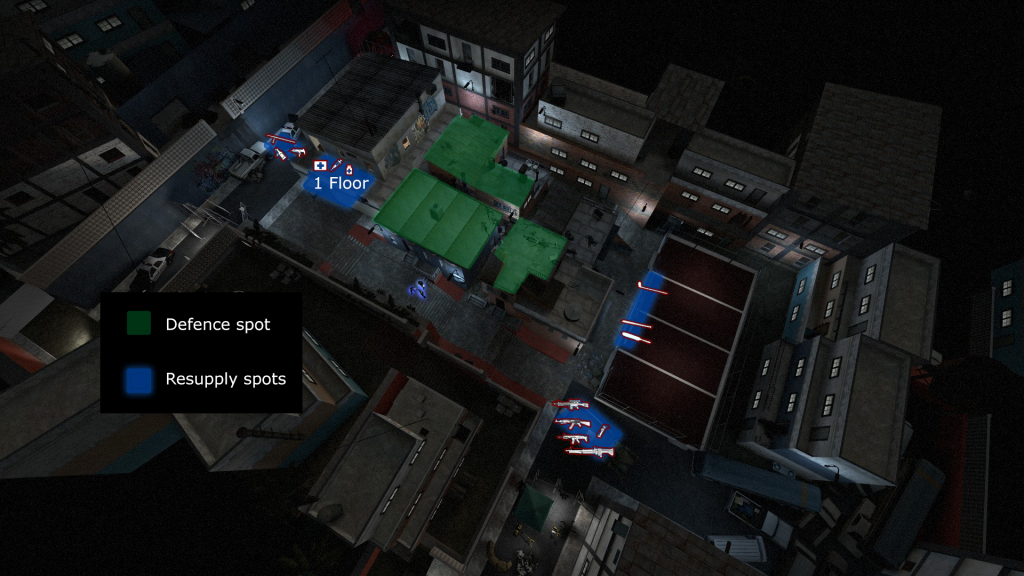 Early in the production, I was able to playtest my map. With the block out and zombies spawning was great and gave me a clear feeling of the map flow and where players wanted to defend from. Having playtesters was a good tool for balancing out the rooftops where a lot of the feedback was that is was to easy to be up on the roof. With this in mind, I made some of the jumps harder and made zombies spawn from more directions to make it more challenging.
With gameplay revolving around high ground jumping and maneuvering I wanted to find a nice balance where the player would not get punished for falling down from the roof. Being separated by falling down is though as it is and taking away 20 % of the player health would make the rooftops to big of a risk to be on.

It was super fun to create a map for a game I have been playing for such a long time. From a gameplay point of view, I am really happy with how the map turned out. I think I  succeeded in making the rooftops challenging and advantageous to play on and sometimes force the players to run around to be able to survive. As with every level, there is always more that you would like to do. I would like to spend more time on the AI Navmesh, it would make the zombies behave more effectively. The light in the level was also a bit rushed and I would want to create more natural light and define areas more with light. When I uploaded the map to Steam Workshop I got a lot of feeback and worked a bit more one the Navmesh because tanks and special infected had a problem with getting to the rooftops. Working from peoples feedback and requests is something i value a lot as a Level Designer.

The reason I could create this map In such short time was the fact I had a intense research and paper design period. I laid a solid and clear vision of the visuals and what type of gameplay I was aiming for. I then playtested my block out and identified what parts of the map I thought worked. With the things that didn’t work, I always tried to solve it in my block out and didn’t push the issue forward and hoped it would be solved when I am propping the level. I think I found a nice balance in improving the design but also setting some design in stone and move on.  I was happy that I could create a favela in Rio De Janeiro. It was certainly a challenge to create a map set in South America with assets from Left 4 Dead 2 which was made for North American locations.